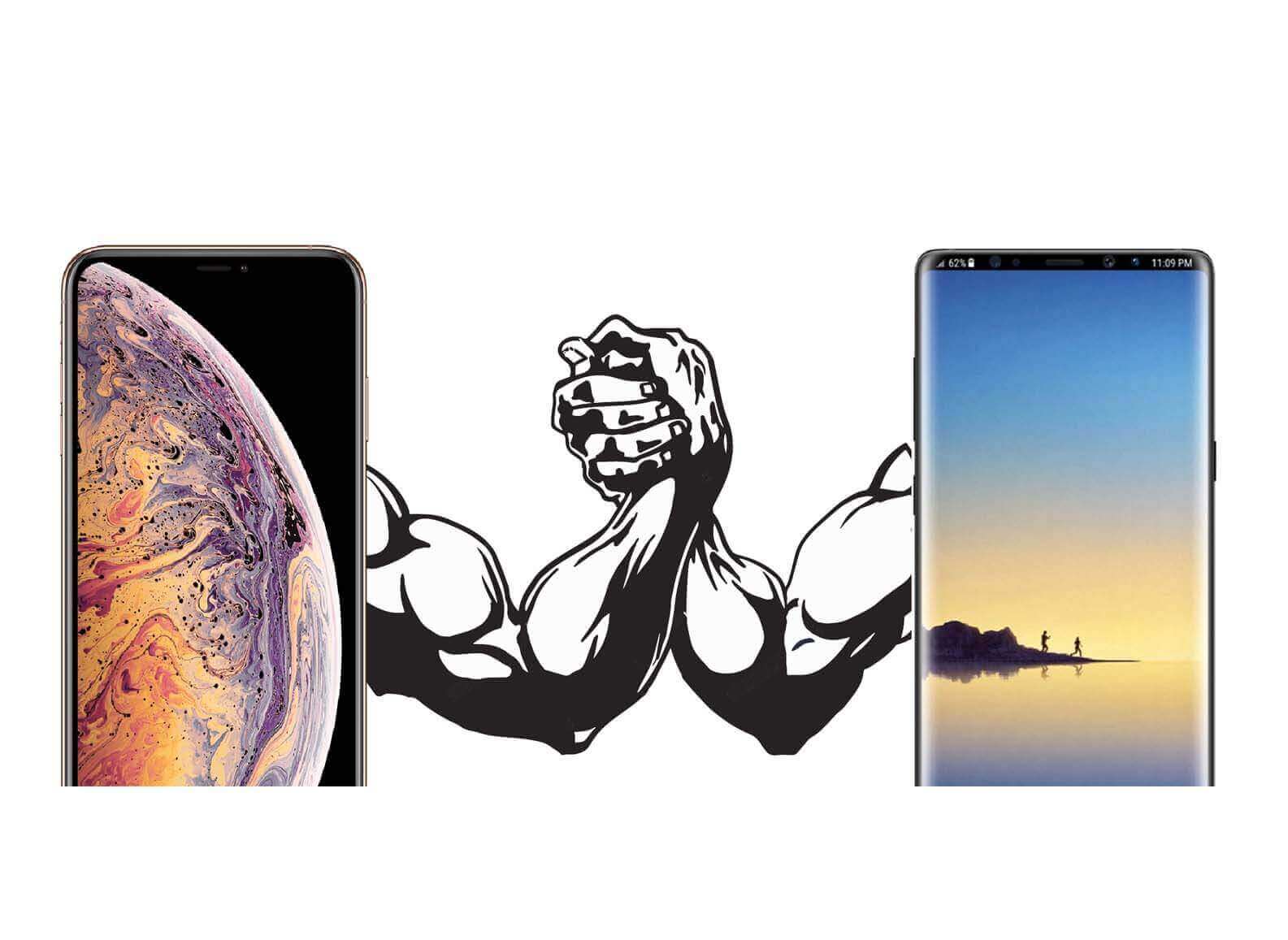 Another year passes by and the never ending battle goes on strong between Samsung phones & Apple phones. Here is the downright details where you can tell where the punch lands and who calls out the final blow. With 2018’s Samsung Note 9 and Apple’s XS range, who can dominate and hold power with strong performance capabilities? Let’s find out more.

Here Is What You Already Know:

Every device has its own spectacular feature or two that makes selling your kidney or breaking the bank a little more worth it.

The all new iPhone XS Max comes with a mega 6.5inch screen, the largest screen made by Apple so far. Thanks to this the phone gives you the brightest, sharpest and more colour accurate display in Apple’s smartphone line. Not to forget Apple’s all new A12 Bionic chip and their latest software which turns amateur photographers into potentially professional content creators. One of the new features is the ability to manually adjust the aperture of a photo, and thus the spectacular depth of field, after the image is already captured.

On the other hand, Samsung Galaxy Note 9 comes in with a competing screen size at 6.4inches. It also takes on the role of a massive storage hub with up to 1TB capacity so there is never a worry to run out of memory space. This device can take over your laptop task in a jiffy giving you the ability to carry one device in your pocket saving weight. Note 9 does separate itself a little from the S9 line and Xs series with its S pen stylus. This year it has the ability to use the button on it as a remote to snap a picture, skip a track in a music player, or advance a slide in a presentation. Let’s not forget about the battery life which gives you a device which works all day long.

What do they hold in common, which gives the people the need to buy them? Both cameras are super capable with advanced features taking natural shots, intricate details and immense clarity of your best moments.

Every device is marketed as the best device with the perfect capabilities to give you what you want and need. It is not until purchasing and using the device do you understand the compromises and drawbacks you face using it. This is why we need to discuss, the harsh reality of exploding devices, beauty and charge gates as well as everything in between.

Samsung Galaxy Note 9 has given us bigger everything from screen to battery life but is that the safest option for its users? Remember Samsung’s Note 7 which had to be recalled due to its unsafe and exploding device. Will that happen with the all new Note 9? In the US, we have already faced the very first explosion due to device overheating. Even though Samsung has had its time to further its research, the  one factor that they should look at is the size of the device. Having a powerful device with a massive processor and a large battery compressed into an ultra sleek phone may have its drawbacks. There is a reason why a laptop has a certain size ration when housing a powerful processor. Although Samsung is just giving their customers what they want with a sleek design and a powerful device, does it justify the risks the users may be facing in the near future? Time can only tell.
On the other hand, Apple this year released its most expensive phone range so far and yet fails in areas that appleheads least expected. The major drawback that Apple has yet to answer to is the charge-gate. Devices affected by the Charge-gate problem do not start charging when plugged in while the screen is off. Tapping the screen to wake the device, or sometimes picking it up will initiate charging. In some cases, affected devices refuse to charge at all, or become unresponsive when plugged in. In these cases, only a reboot will restore normal interaction. Obviously, it is a shortcoming in the software and Apple will correct it, but a word in acknowledgement would have satisfied a lot of Apple customers.

The other issue appleheads are facing is a bit more technical and relates to the camera feature where images clicked with the front selfie camera on the iPhone XS Max seemed to deliver pictures that have skin smoothening. There is a clear difference between pictures taken in low light conditions and the ones in daylight. The difference can also be seen when the same images are captured with an iPhone X. According to Apple, the skin smoothening might happen due to the Smart HDR feature which tends to be engaged in noise reduction in the image captured by the iPhone cameras in the latest devices. Faster shutter speeds lead to higher noise levels and in the process of applying computational photography, the Smart HDR ends up delivering over smoothened textures on images and this is not just limited to skin alone.

If you think such powerful products comes with a stronger body, think again! Apart from emptying your pocket from the purchase alone, if you are to break your phone you not only have to shed a few tears but also shred through your wallet to find more cash.

“Most durable glass ever in a smartphone,” Apple stated. Based on a number of durability tests the screen on the iPhone XS range is closer to the iPhone X than apple claims! It was also said that the back camera glass uses a sapphire glass lens making it scratch resistant up to level 9. Unfortunately, that is yet another grey statement made by Apple. It may be using the sapphire glass however it is not at its purest form proven by level 7 and 8 scratches that marks over the part. Tests have shown that your screen is as fragile as any iPhone screen that has been produced recently, so better protect your $1000 device with a tempered glass screen protector and skin just to save your device and wallet. iPhone repair has never costed so much, with a fixes starting at over $300.

On the other hand, we have Samsung with its infinity display giving you the full screen effect on your phone to maximize your viewing ability. However, with every smartphone comes in the fragile screen that cracks within a heartbeat and has a scratch resistance up until level 6. The Note 9 screen is no better than iPhone XS Max’s screen in terms of durability. It does withstand certain degrees of impact but is it worth risking the fall? No one would think so. Samsung repair however wouldn’t demand such a mind boggling amount to fix your device. Nevertheless, the screen will definitely make you broke if damaged beyond use with it being price at $239. To all tech lovers, stay safe and protect your devices. Doesn’t seem like it is going to get any easier for any of us! Mobile Phone repairs just got even more expensive.

Let’s be honest, at the end of the day these devices come at crazy rates for its specifications. Every device purchased should be an investment as specification upgrades in the last couple of years have not been as drastic as it used to be. A war between these two companies will be ongoing thanks to its competitive traits. In the end it all comes to customer satisfaction, experience and your personal preference. Which do you like the most?