Samsung Galaxy Note 10 and Note 10 Plus, Noteworthy or Not? 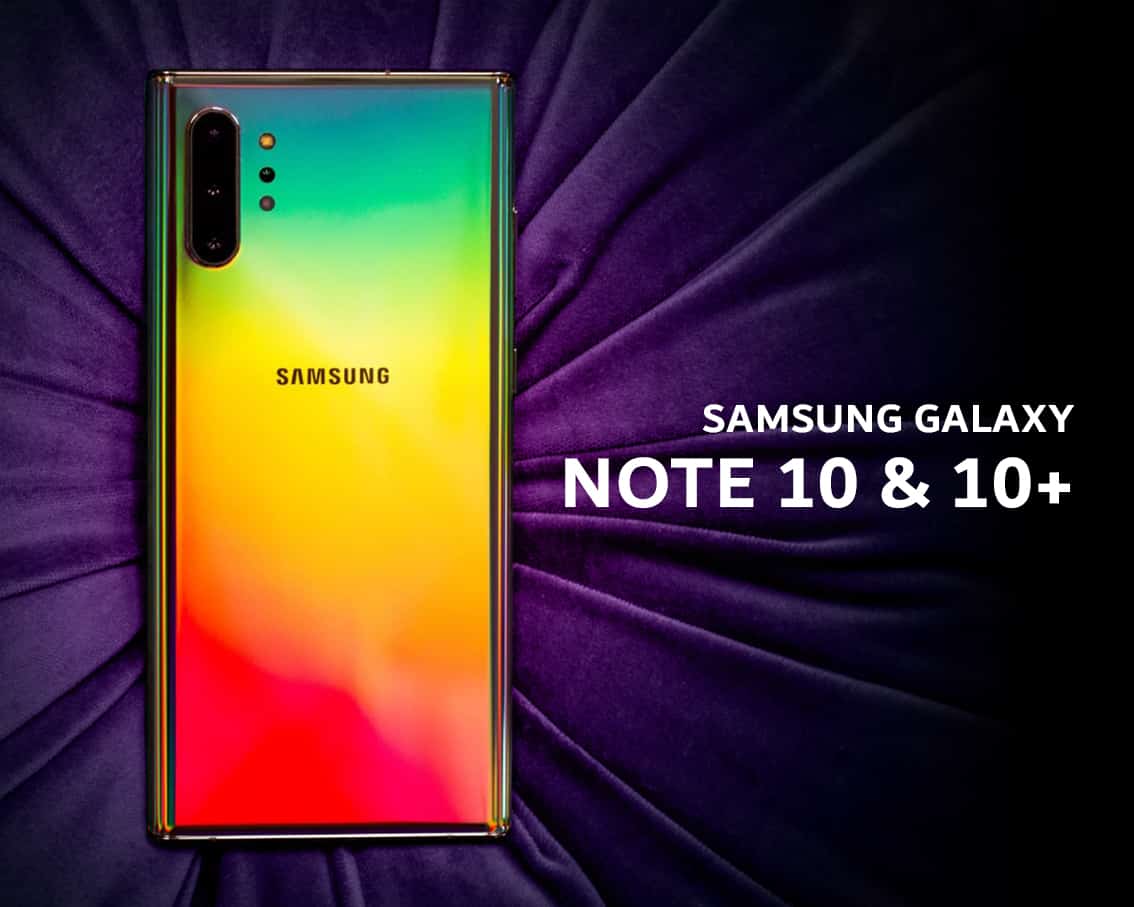 Galaxy Note 10 and Note 10 Plus, Noteworthy or Not?

In terms of smartphones, Samsung’s Galaxy Note line has always given us the crème de la crème of what the company has to offer each year. The 2019 series makes no exception, with Samsung, dare we say, notably launching three devices at the same time in a move we’ve never seen before — Note 10, Note 10+, and Note 10+ 5G. Before you get too excited, let’s take a moment to remember that 5G is not available in Dubai… just yet.

First impressions always last the longest, and boy does the Note 10 make a vivid one. The hardware is edgier, angular, and sharper. It comes in four distinct colours, the Aura Glow standing out as the most impressionable of them all. Its surface reflects a different colour in any light and any angle, making it seem as if the device was lightly dipped in liquid iridescence. The Note 10 series is also available in black, blue, and white, now while these colours literally pale in comparison to the Aura Glow, they’re palatable in their own way.We value our devices too much to not have them end up in a phone case, but lucky for us, all Galaxy Note 10 and 10+ come boxedin with a clear case so we can still gawk at the galactic display. The Note 10 is sized just between the S10 and S10+ but appears larger with the infinity display panels and minimized bezels. Samsung got rid of the Bixby button by repurposing the power button instead; One click powers off, a double click launches the camera, a longer click launches Bixby. In a mildly disappointing yet not surprising shift, Samsung also removed the headphone jack and micro SD card slot, an odd move considering they were able to fit these in the S10e, which is visibly smaller than the Note 10. The Note 10+ even boasts the world’s slimmest vapour chamber to cool off the phone after long sessions of filming or gaming.  All in all, the Note 10 series makes for an ideal amalgamation to showcase Samsung’s prowess in design and hardware.

You might already be familiar with the lens setup in the new Note 10 series. Why? Probably because you’re already seen it before in the Galaxy S10. Samsung ran with the same lenses, software, and arrangement as its sister series. Apart from the ultra-wide angle option and increased stabilization in video, the Note 10 and 10+ don’t have much more to offer on the photography end. The front-facing punch hole camera setup is relatively modernized, almost 75% smaller than that of the Galaxy S10+. The Note series has seen remarkable improvement with its cameras over the years, but with the big guns that Google Pixel and Huawei have been bringing to the table in this era, it might be time to amp it up a notch. Samsung has included “AR Doodles”, a new gimmick that adds a fun, dynamic twist to photographs, not dissimilar to those on Instagram and Snapchat stories. This new feature might seem frivolous to some, but we predict it to be a hit amongst a lot of Moms and Dads.

Samsung has had to make large strides recently to catch up with its competition in terms of power, and they may now finally be at par. The Note 10 and 10+ both come with 25W wireless (and reverse) charging in the box, but the Note 10+ further supports 45W wired charging, which means your device could go zero to 70 in under 30 minutes. The UI saw a jump from 1.1 to 1.5, which although not a departure from the fundamental, comes with some pretty neat additional features. With the rise of live-streaming video game platforms such as Twitch, Samsung ingeniously played its cards right with gamers — the new screen recording feature works anywhere on the interface and even allows you to turn on the front-facing camera to get a picture-in-picture view of the screen and user simultaneously. If you’ve come to be dependent on the Samsung Galaxy S Pen, the Note 10 is the way to go. The S Pen is certainly mightier than the sword, after receiving a compact upgrade with increased ergonomics — an accelerator and gyroscope in the stylus allows users to make air gestures from a distance.

With credibly the most stellar design yet, the Note 10 series pulled off its greatest magic trick yet. They made the Note 10+ the same size as the Note 9 with a larger screen, and the Note 10 smaller than the Note 9 but with the same screen size! We still feel a slight twinge of betrayal  (RIP headphone jack), especially since this isn’t exactly a budget-friendly smartphone and the same for a Samsung repair, but with increased functionality and power capabilities, we have to give credit where credit is due. Our biggest takeaway is if you’re leaning towards the Note series, go all the way with the Note 10+.