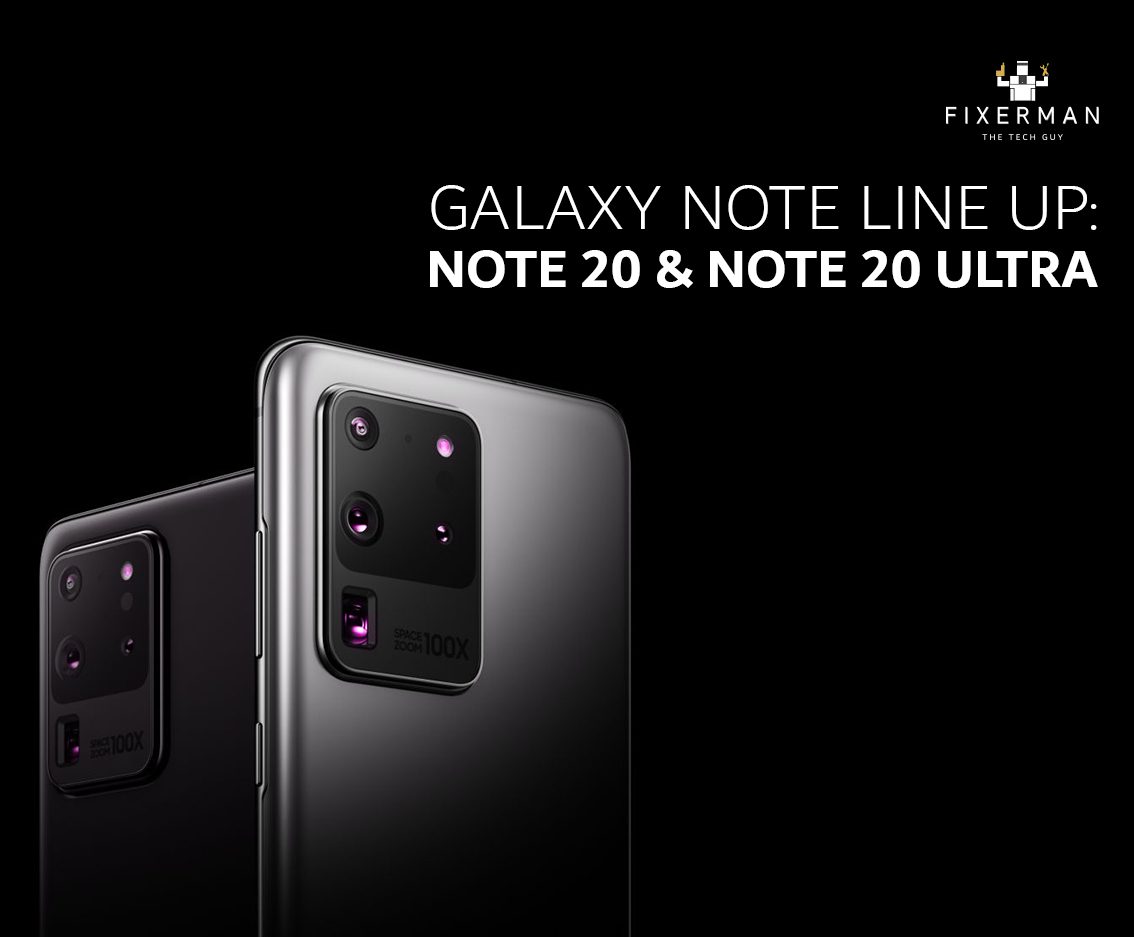 The Samsung Galaxy Note is synonymous with being the most powerful flagship devices in the market. The new two new 2020 models however have more to be told amongst each other than in comparison with their 2019 predecessors, only one phone rightfully earns the crown.

Firstly, both phones have lots of features in common, they both have the new S pens, the power button and volume rockers on one side, and the both have a USB type C ports on the bottom. Samsung also claimed both devices to have 25% brighter screens at peak brightness, Snapdragon 865+ processors, and full 5G support with both sub six and millimeter wave. However, when it comes to every other feature hardware specs there is a clear stark difference between the two. The devices will be available in three new colours -Mystic Bronze, Mystic Grey and Mystic Green, and they come with a great matte finish that Samsung claims to take away all the fingerprints on the devices.

The Note 20 has a 6.7” FHD+ flat screen with a slight bezel and a center hole punch camera, while the Ultra is equipped with a 6.9” WQHD+ edge screen with almost no bezels and an even smaller camera whole punch. The Ultra also comes with an adaptive 120Hz refresh rate but only on HD+ resolution, while the Note comes with a mere 60Hz screen, in 2020, on a $1000 phone, almost shocking. The Note and Ultra also have slight aesthetic differences as well, aside from being bigger in size, the Ultra is also a bit more rounded on the top and bottom corners of the screen driving the whole rounded design home and for the first time, alluding to its iconic boxy design from the past. Both devices still feel bulky, with the Note weighing in 193g and the Ultra coming in at 208g, coupling that with its size, it is virtually impossible to do anything on this phone using a single hand. Both devices also support the much loved DeX, with a new wireless update being given to its platform, now anything that supports Miracast will be fully supported with DeX.

This would not be a Galaxy Note without mentioning the S Pen. The location of the S Pen has moved to the left side of the phone and this year the S Pen makes one particularly huge leap forward, and that is in latency. The latency of the S Pen was around 42ms in the previous models, this refers to the time it takes to register something on the screen after touching the screen with the pen. The new S Pen has a latency of only 9ms, nearly a fifth of the time taken by the previous iteration of the Note and this makes it on par on responsiveness with the Apple Pencil.

The most noticeable feature of the Note lineup this yea has to do with the rear cameras, at first glance it is almost hard to miss the insane bump housing the three-camera set up. Both phones have a 10MP F/2.2 front facing camera, in the rear, the Note 20 has a 12MP F/1.8 wide lens, a 64MP F/2.0 telephoto lens with hybrid 30x zoom and a 12MP F/2.2 ultrawide lens; while the Note 20 Ultra houses a 108MP F/1.8 wide lens, a 12MP F/3.0 telephoto with 5x optical zoom and a 12MP F/2.2 ultrawide. There is also a new laser autofocus sensor that comes as a welcome improvement to the previous focusing issues along with the proprietary Samsung Space Zoom with 50x zooming capabilities. On the video side of things, both phones support 4K 60fps on the front facing camera and 8K 24fps on the rear facing ones

In conclusion, the Note 20 has always maintained the title of the most beefed up large premium device and it has done so once again this year with the Note 20 Ultra. The Note 20 is disappointingly almost spec to spec similar to the S20 and the S20+ with a slightly bigger battery and the S Pen. Admittedly the S20 has a Snapdragon 865 as opposed to the Snapdragon 865+ processor on the Note 20, which is not a huge leap forward in terms of computing power and overall experience. In our opinion, there is only one true beast in the Note line up and it is the Note 20 Ultra. Let us know what you think across our Socials and which Note device will you be getting in 2020.