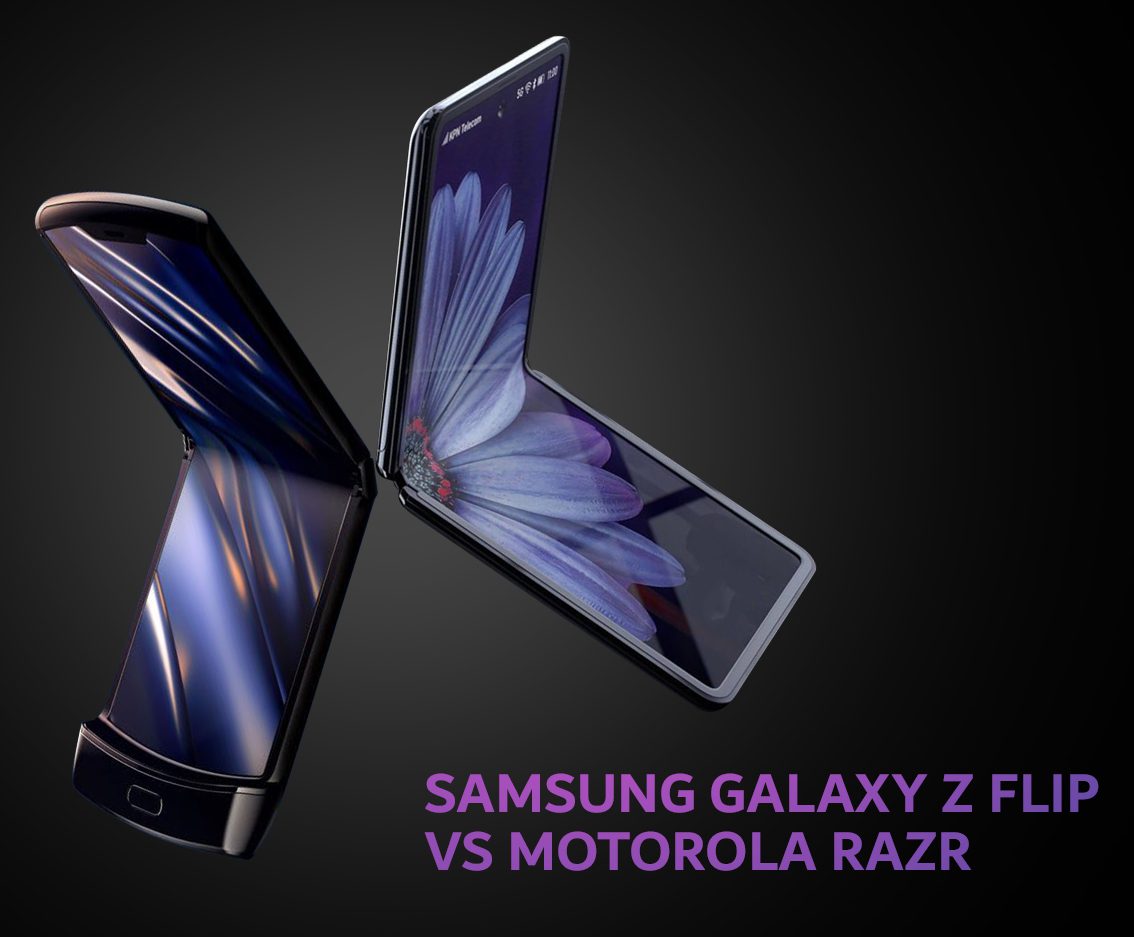 Back To The Future

The first Moto Razr was released in 2004, back when you were either one of the lucky ones that owned the futuristic device, or you saw Shah Rukh Khan snap it shut in Don and then spent months convincing your parents that you just had to have it. Sixteen years later, Motorola released their reimagined device just a few days before Samsung put out its own flagship. So, today’s blog is a blast from the past, where we compare the two front-runners in foldable flip phones: The Samsung Galaxy Z Flip and the Motorola Razr.

While both devices have a standard flagship unfolded screen (flex view) size, the Motorola has a decent outer screen when the device is folded (quick view), that lets you manage your general notifications, text messages, and emails. On the other hand, Samsung doesn’t have a functional outer screen, its small screen is primarily intended to display time, is limited to cursory notifications, and even acts as a comically tiny view finder for selfies. Motorola has a cleaner look in black, while all colors of Samsung seem to be a magnet for fingerprints. Even though Samsung is in the lead in terms of sturdiness of display, the overmarketing of its glass screen seems to be limited to how the display feels underneath your fingers rather than actual durability of the screen. The displays we get with flip phones are not at par with the screens we’re currently used to on our smartphones, but it’s exciting to see the evolution of folding screens and where we can go from here. Both phones have their proprietary folding glass technology and plastic protection, but we will have to wait and see which will endure the test of time.

Fun Fact: Motorola claimed that the Razr was reverse engineered from the design of the original Moto Razr device, wherein they worked backward to provide users with optimal specs in an already predetermined prototype.

Just like older flip phones from back in the day, the Motorola has a slight spring to its flip, it readily pushes itself fully open or shut once it’s given a slight nudge. There are two tiny knobs on the top corner of the screen that gives the phone the slight gap when snapped shut. In your hand, the Samsung’s hinge is noticeably much stubborn and sturdier than its counterpart, you can flip open the device at any angle you would like and it would steadily hold. The bezels around the perimeter of the screen are slightly raised, which is what gives this device the tiny gap when folded. Samsung has marketed the phone to be sat upright like a seat (flex mode), sort of for users to have the ease of a smartphone staring at you like a laptop rather than you hovering above it with a craned neck, but it feels like an awkward set up for a device this small. All in all, neither phone opens too seamlessly with just one hand, and at this price point, you’re better off using two!

In comparison, Samsung’s lens configuration is miles ahead of Motorola, they’ve got a 10MP selfie camera on the front a dual setup in the rear, while the Razr has a 5MP front camera for formality and a 16MP rear, granted the latter can be used as a selfie camera too. Even though Samsung might win this round, their lens configuration still isn’t at par with any current flagship models from the last two years, and once the novelty of the flip wears out, we’re left with a compact device and passable camera. The 2510mAh battery in the Motorola feels lacking given the display size, suggesting you might get more hours of screen time from Samsung. Motorola claims the Razr is splash proof but the device hasn’t received an official IP rating yet, and we’re still waiting on Samsung. And just in case you’re wondering, yes you can end a phone call by dramatically snapping either device shut.

In the last few weeks, smartphone users have been reporting problems with the display and hinge on both devices, from both durability or extreme weather changes. To mitigate user trouble, Samsung has announced a screen replacement program that makes Galaxy Z Flip users eligible to a one-time screen replacement of AED 437 and a one-time specialized screen protector application, free of cost.

Regardless of the downfalls, we’re impressed with both these devices and even more excited to see how innovation in this decade’s flip phones takes off from here. Overall, we have to give it to the Galaxy Z Flip for packing in a better display, battery, and camera setup in the given size, but the Motorola Razr just has that IT factor we can’t quite put our finger on. It may have a higher price point with slightly lesser specs but we can’t help being drawn to this nostalgic piece of tech.