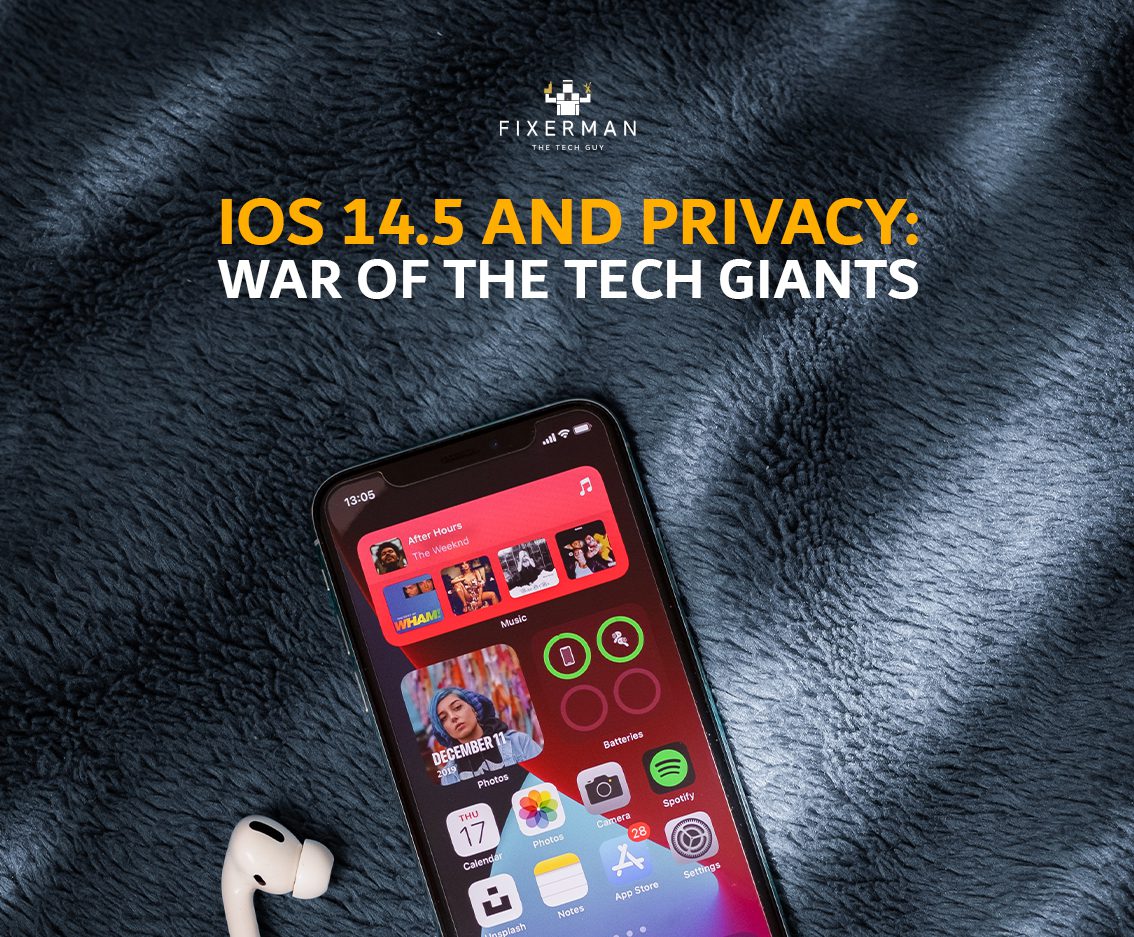 The new iOS 14.5 update has sent shockwaves through the tech world and it is not because of the new android like widgets. The update has even resulted in a war between two tech giants, Apple, and Facebook. The issue at hand is quite complicated and in fact, you are probably thinking what is this beef all about? Apple makes phones, tablets, laptops and more. Facebook makes social networks. Two seemingly different areas within the vast world of technology, but it all comes down to one thing – Differing views of our privacy. This is however just the beginning; this is a fight that could shape the future of the internet and even the next generation of computing.

To begin explaining the whole issue, let us start at the beginning of the controversy – iOS 14.5 and a new feature called ‘App Tracking Transparency’ (ATT). For many years now Apple has had a secret strong of numbers inside of it called the IDFA which stands for Identified for Advertisers. It essentially functions as your very own Ad tracking number and its purpose is to help apps identify you and know what you are up to on your phone. Let us try and explain this through an example, say Mr. Ahmed, let us call him user 012345, has decided to turn healthy and downloads a new app to help him exercise and meditate. The app records his number and simultaneously the Facebook app and all the other apps on his phone also have this number. If that same exercise app wants to get Mr. Ahmed to buy something from within the app, let us say a subscription service, it can now go to Facebook and say, ‘hey, let me advertise to user 012345’. If Facebook also has that number, then there is a match and just like that a personalized ad shows up on Mr. Ahmed’s social media feed. There is also another way this system is used. Let us say that exercise app shows ads in their feed, it can now use Facebook’s Ad network, which again uses that number to keep track of your other interests and feeds you that highly personalized ads. And there you have it, these numbers are extremely useful for Facebook and other social network ad that want to know what we are doing on our tech devices. They are also good for the businesses that want us to buy more things.

However, things are about to change as the new iOS 14.5 update turns off this ad tracker by default. If the app wants to track you it will have to ask you. This means that if Mr. Ahmed taps, “Ask App Not to Track”, then his exercise app will not get his number. Apple is giving companies a chance to plead their case with this area right here that explains what the company uses the data for. If you do not want those popups at all, then you can opt out of all tracking by going to Settings, Privacy, Tracking and turning off “Allow Apps to Request to Track”. All in all, this is Apple’s big play to give people a choice whether they want to be tracked. And chances are, more people are going to tap Ask App Not to Track. And guess who isn’t happy about that all?

Facebook’s business is built on personalized advertising. Instead of charging you to use Facebook, Facebook charges companies to advertise. These ads are targeted at you based on everything Facebook knows about you. Many in the business community have shared concerns about Apple’s forced software update, which will limit businesses’ ability to run personalized ads and reach their customers effectively. Facebook CFO, Dave Wehner, was clear about how it will impact Facebook directly on a January 2021 earnings call – “We continue to believe that that will be a headwind in the ads business. We’re going to have to be providing a prompt asking people for permission to use third-party data to deliver personalized ads and we do expect there to be high opt-out rates related to that.”

The company added that the Apple prompt does not give enough context about the benefits of personalized ads. Still, while Facebook has said recently that it will not have a big impact to its own business, Facebook seems to be acknowledging that given the choice, users would prefer not to be tracked. A Facebook spokesman said, “While Apple claims the update is about privacy, it’s about forcing small businesses and developers to charge for apps that were once free, hurting consumers in the process. Free, ad-supported services have been essential to the growth and vitality of the internet, and we’re joining others to point out Apple’s hypocrisy and anti-competitive behavior.” An Apple spokesperson responded. “Apps and advertisers can continue to track users across apps and websites as before. App Tracking Transparency in iOS 14 simply requires that they ask for users’ permission before sharing their data with other companies. Supporting small businesses has been at the heart of the App Store since it was created to help developers of all sizes develop, test, and distribute apps around the world.” The company also says it has introduced new free tools for advertisers to measure their campaigns while respecting user privacy.

As a company based on hardware sales and more recently, more subscription services, Apple has long stood on the side of user privacy. Steve Jobs in 2010 said – “Privacy means people know what they’re signing up for in plain English. And some people want to share more data than other people do. Ask ’em. Ask ’em every time.” Tim Cook has taken over that mantle and said this in January 2021 – “If a business is built on misleading users, on data exploitation, on choices that are no choices at all, then it does not deserve our praise. It deserves reform. At its foundation, ATT is about returning control to users, about giving them a say over how their data is handled.” But of course, there is benefit to Apple’s business. Mr. Cook and his team see privacy and other security features, like encryption as a selling point of its hardware and software combo.

In conclusion, two men, two very different business models and two very different visions of how technology and the internet should work for us. And the future fights are going to go way behind privacy. On that same earnings call from January, Mark Zuckerberg said, – “I do want to highlight that we increasingly see Apple as one of our biggest competitors”. He pointed out products like iMessage competes with Facebook’s messaging business, which includes WhatsApp, Instagram, and Facebook Messenger. “Apple has every incentive to use their dominant platform position to interfere with how our apps and other apps work, which they regularly do to preference their own”.

But where is this all really heading? Literally our heads. The fight for the future of computers, augmented reality glasses. When the tech is ready and these are not just big, bulky headsets, these glasses will probably run an operating system made by one of these companies. And it could be a fight bigger than Android v iOS or Windows v Mac. Facebook, which owns Oculus, is investing heavily in the software and hardware side of glasses and is planning to release some smart glasses in the next year.  Apple is working on its own headset, according to various reports and Tim Cook has shared his interest in augmented reality for years now. So as can see, this change in iOS 14.5 is just the start of this fight.