Phones and the Climate Crisis: Issues and Solutions! 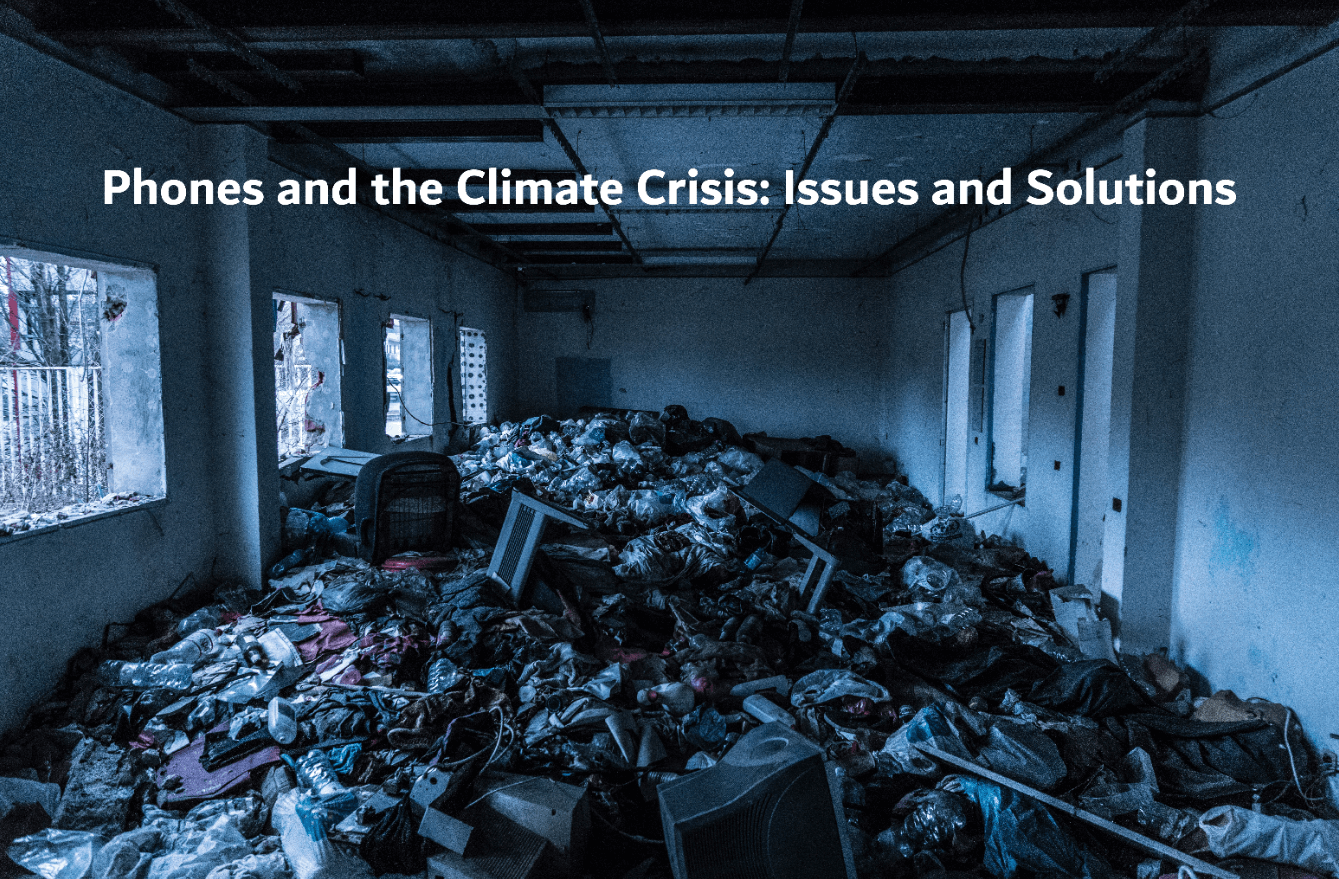 Phones and the Climate Crisis: Issues and Solutions!

Everyone has that one draw in their house filled with old devices, phones, tablets, pagers and even laptops, gadgets that were once an important part of our lives, now just waiting in endless perpetuity.

Phones are an important part of all of our lives, it helps us live, work and socialize more efficiently, effectively, and economically, but the environmental impact these devices can have on our planet is big and it can start even before it reaches us. Around 80% of the greenhouse gases emissions that come from a smart phone occurs before it even reaches your hand. On average people swap out their phones every 2 years, and nearly 1.4 billion phones are manufactured and sold every year and where these devices were put together matters when it comes to how big the energy footprint is. Phones in general make massive trips all around the world to be manufactured, produces, assembled, packaged, before being shipped and sold. Much of these trips are done on giant container ships that travels from country to country on each step of the process (sourcing, assembly, distribution, etc.) and this is not unique to smartphones and are common with most global commodities that we buy. Usually, air pollution issues such as smog is usually related to cars on the road, however all these container ships can produce an equivalent amount of smog and particulate mater pollution as all the cars on the world combined.

With most modern phones, once it has been put together it is quite difficult to take it apart, and that makes them hard to repair. Phone companies have defined us as ‘users’ of electronics, we are no longer ‘participants’ with them anymore, despite the great history of humankind with tinkering of products, cars especially, which was once required by law in places like the U.S. to be manufactured in a way that would allow consumers to be able to fix the devices themselves or through a robust repair community that existed outside the manufacturers. Phones these days are incredibly advanced and can be quite hard to imagine fixing them yourself as opposed to a leaky sink or a flat tire, however it is not impossible. There can be many benefits to fixing you phone, financially and environmentally.  It is easy to understand as to why opening and fixing you phone can seem like a daunting task, the price of the phone and even the amount of data within it, can discourage event the bravest of owners. However, what if phones were not that hard to fix? Following this exact logic, the Fairphone company released it phone to allow users to swap, build and customize their phones in the most ethical way possible and in 2019 they even launched a second version of the phone (Fairphone 2). Almost every single component of the phone is easily removable, without major tools needed and easy reassembled. Unfortunately, the Fairphone is currently only being sold in Europe which means we have to now look at other option for getting rid of our phones – responsibly.

The first thing we need to understand is to why we must never simply throw our smartphone away in the bin like an ordinary piece of general waste. The reason is that almost every component in our device can cause some kind of toxic waste, materials like our batteries which is primarily a lithium-ion based device can be dangerous both for the environment and also human safety as it can potentially ignite and explode if dealt with incorrectly. This means that each and every one of us needs to be responsible in our ways of disposal and have to ensure that we do not toss them in regular bins. There are various organizations, companies and even pick drives that happen all around us that will ensure that these devices are collected, separated, and disposed of safely. Some manufacturers themselves have buyback programs or even exchange options to enable this. Apple has even developed a robot that can take apart an iPhone in just 11 seconds, allowing them to streamline the process, this equates to 1.4 million iPhones a year.

There is a growing industry built around e-waste recycling as a lot of important commodities can be extracted from it. Materials such as screws can be reused in future models, Silver can be extracted to be used to make solar panels, tungsten can be used to make precision tools. This entire process of extracting valuable minerals from electronic devices is called ‘urban mining’.

In other industries, say for example the airline industry, it is perfectly normal to get on an aircraft that is perhaps 30 years old and fly across the Atlantic, the same however cannot be said for consumer electronics like our phones. If given a phone used 30 years ago, it would be hard to even figure out how to use it even how to charge it and that is fundamentally the issue with electronics today. The pace of innovation is so fast and built in such a remote way from the consumers that it actually promotes disposability. But we as a society are at a tipping point, companies and consumers alike are taking the issue more seriously and want to see manufacturers provide more ethical and sustainable options in the market. This is evident as we see ‘sustainability’ take the core messaging and marketing language with the new tech announcements of most devices this year and we expect this to continue for the foreseeable future.