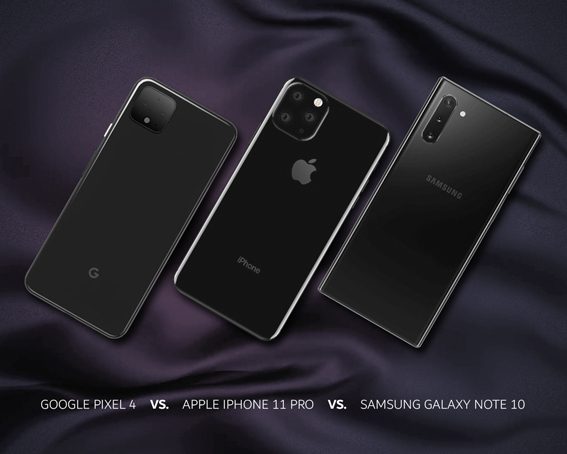 Sporty over sleek, the Google Pixel 4 makes its mark in three colors; a glossy black finish, a white and an orange, both available in a matte finish. Starting right off the top, the sensor bar houses the facial recognition sensors and the Soli radar chip — Pixel 4 seems to have the quickest facial IR sensors yet, so instantaneous that Google actually included a setting allowing users to slow it down, giving them a chance to see the lock screen before immediately opening up to the home screen.

Google has humbly presented some breakthrough tech to the table with the Soli radar chip. It forms a “bubble of awareness” around the phone that senses your presence, launching facial recognition by the time you’ve picked up your phone to your face, and automatically locking it once you’ve placed it back down and walked away. The volume of the Pixel 4’s ringtone or alarm gets quieter the closer your hand gets to the phone, saving you at least some embarrassment in a meeting or movie theater.

At one point, Pixel 3 seemed untouchable in terms of smartphone cameras in the market, but after the iPhone 11 Pro, Pixel 4 is up for some serious competition. There’s only one selfie camera, but the 90-degree field gives users a pretty wide view. You can play around with brightness and shadows right in the viewfinder of the main camera before taking the photograph, rather than making adjustments after it’s processed. Surprisingly, Google didn’t opt for an ultra-wide lens, claiming their tech allows telephoto to use data from the second lens to produce a better picture. Pixel 4 has their video limited to 4k30fps compared to their competitors, but it doesn’t seem to be holding them back.

Along with the Titan M chip, the Pixel Neural Core does a lot of the heavy lifting for voice and photography; Google has on boarded it’s entire machine learning model for english onto the Pixel 4, making Google Assistant super speedy in searching the phone, apps, or web, and also equally fast offline. The voice recording app even lets you transcribe audio in real time, which could be a game-changer for many users, and if that user is you, set a reminder that shipping for the Pixel 4 starts October 24th.

We already discussed how Apple puts the “pro” in promise, but now it’s time to see whether they put the “pro” in professional. A lot of us were worried about the bezels of the triple-lens camera array on the iPhone 11 Pro, but like a lot of tech, the setup definitely looks much better in-person. It still gives the phone a slight wobble when placed face-up on a flat surface, but if you cash out for this device, you’re more likely to cash out a little more for a protective phone case, so it won’t really make a difference overall. The stainless steel frame gives the smartphone some resistance but packs a little weight on the sleek device. The midnight green colour seems to be a popular choice upon release and the matte back glass truly rids the nuisance of a fingerprint tainted phone.

Apple’s promises for an improved FaceID with upgraded sensors and a multi-angle lens, had us a little excited to be spoilt for convenience, it’s already 30% faster on the iPhone 11 Pro, but lacks notable improvement on unlocking at different angles. By replacing 3D with haptic touch, the new pressure sensitive display has allowed for more space to give the device a larger battery, and Apple has indeed delivered with an additional 4 hours of battery life from the iPhone XS to the iPhone 11 Pro.

Out of the three devices we have on the ranks, this device is currently leading in terms of cameras — the colour and sharpness is fantastic — producing highly realistic images that aren’t saturated with over-processing or heavy beautification. Even video gives users a bang for their buck, with excellent dynamic and tonal range. The viewfinder of the main camera shows a preview for ultra-wide before switching to the option, which might be distracting for some users but overall a useful tool, eventually disappearing when the camera senses a close-up object. Night-mode appears automatically when the device detects dim lighting/darkness, but there’s no option to turn it on manually. When users are paying upwards of AED 4000 for a smartphone, you hope it would come with obvious upgrades from the previous model, but Apple doesn’t seem to have put in the much needed leg work on improving upon portrait blur edging; they’re distracting us with the 12MP selfie front camera and it’s kind of working.

The Note 10’s lighter, aluminium frame might not be the most durable if dropped on an edgier surface, but does not attain micro-scratches as easily as its rivals’ matte finish. Along with the classic colours, the Note 10 comes in a galactic Aura Glow, a vibrant and refreshing design compared to the plethora of blacks and greys on the market. The seamless edge-to-edge display runs around the tiny, punch-hole setup front camera, making this device an obvious pick for gamers and streamers. Samsung ingeniously played its cards right with these users — the new screen recording feature works anywhere on the interface and even allows you to turn on the front-facing camera to get a picture-in-picture view of the screen and user simultaneously.

We still believe the pen is mightier than the sword— the Wacom digitizer S-Pen feels like running a sketch pen across a piece of paper, the incredible responsive apparatus received a compact upgrade with elevated ergonomics to be used for magnification, editing, and also for fast language translation. An accelerator and gyroscope in the S-Pen allows users to make air gestures from a distance.

The triple lens, four sensor camera setup keeps The Note 10 as a top contender. Its wide-angle covers a larger field of view than most of its direct competitors, delivering impressive colour rendering that produces vivid and lively images in both natural and artificial lighting. The Time of Flight (ToF) sensor offer a pretty realistic depth estimation in Portrait mode.

The added functionality of the Note 10 is really what makes it the real Pro; from split screen shortcuts from the edge screen, customized widgets, AR doodles, to deadly combination of processing and power capabilities.

The Google Pixel 4 yields the most elevated tech of the bunch, with more leaps than tweaks, the prowess of post-production software in this device is currently unmatched, remaining a noble competitor with one camera less than its rivals. For the Apple iPhone 11 Pro, we came for an enhanced camera experience, and eventually stayed for its remarkable battery life. At its prices, Apple has oddly remained stagnant in other specifications of the smartphone, but their augmentation on the iPhone 11 design and lenses might just make up for it. The unrivaled customizability and functionality of the Samsung Galaxy Note 10 is a reminder that this Korean giant always says less and does more, we believe this device truly speaks for itself.