Smartphones to look out for in 2020! | Fixermanme Tech Blog 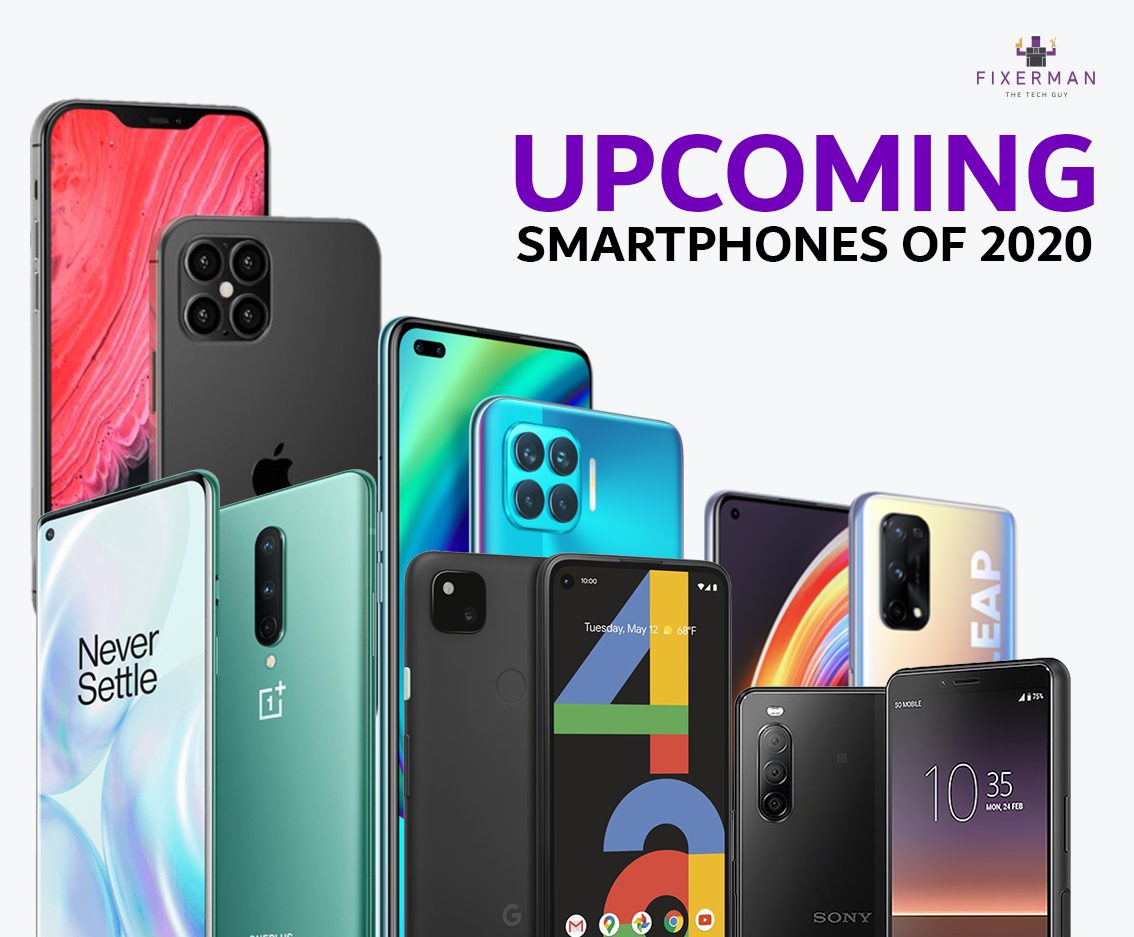 The month of September is rightly dubbed Tech-tember. It is officially smartphone season and there is a ton of phones that are set to be released between now and the end of the year. Here is a sneak peak into the line up of devices we can look forward to still in 2020.

The September iPhone event did not have any new phones being announces, which only means that the official announcement and release will take place in the month of October. As per rumours, up to four new phones are expected this year, which would make it the most they have ever launched in a single event. There is going to be smaller iPhone that will have the same form factor as the flagship devices, which means no ugly bezels like the ones on the iPhone SE except of course for that notch with an OLED display. The phone is rumored to be quite affordable with a dual camera setup and 5G ready, if true, this is going to be one of the most popular phones for the year. In terms of the other phones, dual camera set up rumored for the iPhone 12 and 12pro, while a triple camera with potentially LiDAR sensors for the 12-pro max. No concrete report so far on the high refresh rate, there has been leaked info suggesting that there will and will not be a 120Hz screen on any of the devices, so we will still have to wait and see for this. Overall, it is expected to have better battery, processing power, flatter design, smaller bezels, a smaller notch, and a better Face ID sensor covering more angles.

The line up is said to contain possibly an X7, X7 Pro and an X7 Pro+. The standout feature on the X7 Pro is a 120Hz AMOLED screen and 65W fast charging, which is great for the rumored price tag at 350$ (UAE prices not out yet). In terms of camera a 64MP (Sony sensor) lens, which is a decent spec for this price point. Overall, these three core specs are quite decent for this package and it is rumored to be out early October.

Oppo will include the F17 and the F17 Pro in their release in late September. The Pro version is said to feature the new media set chipset, the P95, making them certainly a budget or upper budget range phone. Once again, solid specs on sheet all round, 30W fast charging, a quad camera set up with a 48MP main sensor and an 8MP secondary sensor (ultrawide). You will not receive any 4K recording on this, but you will receive the extra auxiliary cameras in your arsenal. The non-pro version will apparently feature a water drop notch, while the pro version will go with the cut-out. Overall, very good specs, a typical Oppo phone with fast charging and a host of cameras.

Xiaomi just released the Mi 10 Ultra in August 2020 exclusively in China, which means the only way to get your hands on this device is through the Mi 10 series that will be released internationally. The line up is said to include a Mi 10T, lite and pro, in typical Xiaomi fashion each phone will be released with a bunch of hardware features on each. An interesting feature on the pro model is the 144Hz refresh rate screen, which is quite incredible, however it is on an LCD. Some photo leaks also show a 108MP main camera on the pro version, with 64MP expected on the other models. With regards to chipsets, a Snapdragon 865 or 865+ will feature in the line up as it is expected to be a higher end phone.

Sources from a reliable leaker has provided an insight into the render and design of this upcoming Sony device. The phone looks stunning as most Sony flagships, with a 6.1” full HD+ AMOLED display, 21 x 9 aspect ratio, 120Hz refresh and a triple camera setup with wide, ultrawide and zoom all with a 12MP sensors. A snapdragon 865 will run the device and will be powered by a 4,000mAh battery with what Sony are calling a ‘PD’ charging, which should be pretty fast.

Pixel 5 and Pixel 4A

With many different leaks and renders, most of us have a fairly good idea on what to expect with the new Google lineup. The most interesting feature is the removal of the terrible notch on previous Pixel devices, along with the removal of their RADAR feature which no one really used. 3D face ID will also be gone, which is slightly unfortunate, but you will receive a modern and clean design with a hole punch selfie camera. The screen is said to be 120Hz OLED display with the fingerprint sensor on the back. Midrange chipsets, a snapdragon 765G, will also feature in the line-up, including on the Pixel 5 which is a surprising move given the other high-end specs on the device.

A new One Plus will launch on October 14 following up from the One Plus 8 and 8 Pro. Rumors suggest a 120Hz refresh rate, Snapdragon 865+ chipset, a Samsung like camera array and a 65W fast charging, which all points towards very flagship spec sheet and potentially price tag too.

It truly is smartphone season, with the best in every category arguably still yet to come. We will be watching this closely, and in the mean time let us know which phone you are most looking forward to this year!