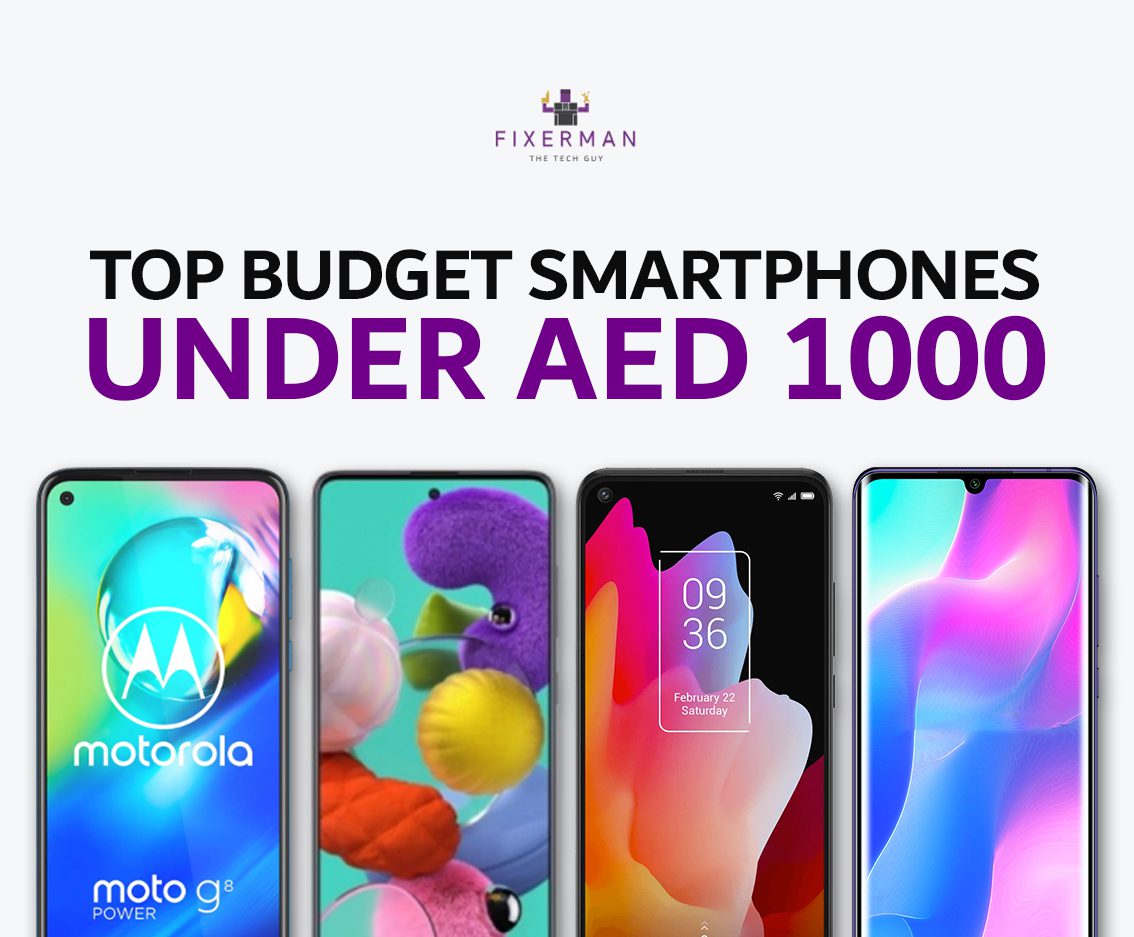 Finding a phone is not difficult anymore these days. We are spoilt for choices with phones of different, shapes, sizes, abilities, features, cameras, and manufacturers all available in the market. Finding the best phone however in an extremely competitive price bracket of under AED 1,2000 can sometimes be a bit more challenging. Today, we are going to be providing some attractive options that are internationally available on Amazon right now, because there are indeed a lot of phones under the AED 1,000 bracket, however they are not always readily available to consumers worldwide.

We start the list of with the Moto G8 Power, a very solid option. For starters, its price begins much below the magic ‘1,000Dhs’ mark and so you will have some spare change left over to buy additional accessories along with the phone. It is a well built with good hardware and good design, however the first thing to be concerned about this device is the chipset. It currently houses a Snapdragon 665, which is the lowest configuration of all the options we will be providing you in this article, but the other phones will be much closer to the 1,000 dirham mark as compared to the Motorola option. The Snapdragon 665 is perfectly capable for this phone, if the type of user is someone who uses their phone just to message/call people and scroll through social media. However, there are certainly better chipsets that you can get under 1000 in different phones if that is something important to you. The G8 Power also packs a real triple camera system along with a macro sensor, so you will get an ultrawide, a main camera and a telephoto. All three are useful lenses, so definitely some options when it comes to the cameras, the macro lets you take photographs really close, although this may not be a feature everyone might use, it is just an additional perk that is available with this device.

TCL is slowly making a name for themselves in recent years after entering the smartphone market, despite being primarily a key player in the television industry. Just like the Moto G8, the 10L also houses a Snapdragon 665, which means you will get the same performance for both devices due to the same chipset. Coming to cameras, the 10L goes away with the zoom camera and instead has an ultrawide, a main camera, a depth sensor, and a macro sensor. Once again, while the macro sensor might not be that used, having a depth sensor can help a lot with portrait shots if you take a lot of those. While portrait shots can be done completely using software it is always handy to have a hardware support for better output. The phone has a very modern design, good built and TCL overall has a good reputation of providing good quality devices at affordable prices across all their products.

As a whole package, this is one of our favorite mid-range phones to recommend. The only concern you must think about while getting any Xiaomi device is to make sure if it supports the bands in your area, which can be an issue in certain parts of the world. UAE in general does not have this issue, but if you wish to take this phone to the U.S. or even Europe it is worth checking before committing. Apart from this, it has an incredible number of features that is packed into this device making it a clear stand out pick. Aesthetically, it is one of the best-looking phones in the mid-range market and even amongst slightly more expensive phone thanks to its very premium design. It has a metal and glass finish with a flowing curved OLED display which really increases the cost of the phone, but Xiaomi has managed to have these features to adds to its ‘premium look’ while simultaneously keeping the price below 1000 . The processor it houses is a Snapdragon 730G, which is a great mid-range chipset which allows you to work, game and it is a significant upgrade to the 665. It is, however not the best mid-range chip set that is available right now, it is nearing more to the end of its time at the top, as we will soon see processors like the 765, 765G, 768 in more mid-range phones coming out this year, with a slightly higher price tag due to performance upgrades and most notably the inclusion of 5G. Additionally it also has huge battery over 5,000mah battery, that will comfortably get you through the day and more. The camera set up is a quad camera configuration including an ultrawide and a 64mp main camera, with a new, modern, Sony IMX 686 sensor under the hood. Finally, you will also get a 30W fast charging (quickest in the list), making this an overall stand out, bang for the buck device that Xiaomi are well known to make.

The Samsung Galaxy A71 is undoubtedly the most popular phone worldwide in the mid-range category which is why we have included it in our list despite being slightly more than 1,000. The device provides you with a beautiful screen, and it well known that Samsung make one of the best screens on devices. You also get a very modern design with a hole punch display in the middle instead of a notch, which makes it feel like an S20 series in many ways. You will get a main, ultra-wide, macro and depth as your camera set up, along with a 25W fast charging for its 4,000mah battery. A particularly good solid chipset like the Xiaomi, but slowly starting to get old but still packs a punch for the needs of the phone. Overall, you get a well made device from an internationally trusted brand, and you know exactly wat you are going to get when you buy a Samsung device and you will not face an compatibility issues worldwide. Unsurprisingly, making it one of the most popular choices for consumers everywhere in this price bracket and hence it makes our list.

In general, when it comes to phones around this price a good thumb rule is to always check for the device with the best chipset. As a highly competitive price range, manufacturers often try add certain features or gimmicks to stand out amongst the pool like modern design, depth sensors, faster charging, macro lens etc., but ultimately it is always about the chipset as the main engine of the phone. So it is up to you as a consumer to pick the feature you most want in combination with a good chipset that you should aim to purchase!