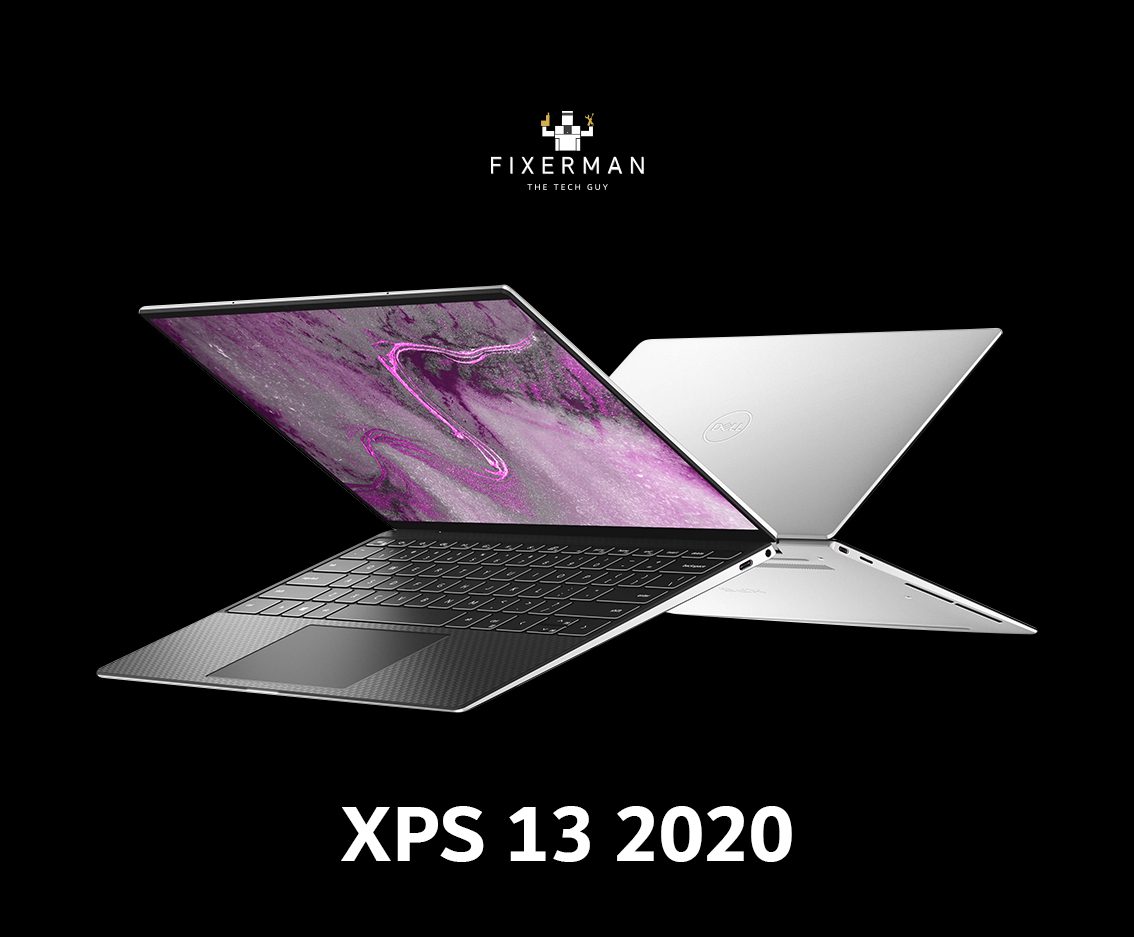 Since Dell released its XPS series, they have consistently been the answer to the question:

“Which laptop should I get as an average daily user?”

The Dell XPS 13 is back refreshed for a 2020 update, with a similar price tag and good improvements from the 2019 model. The 2019 model already was a great package and we did not necessarily expect a 2020 one, but it has got some great features. Aesthetically, it is a beautiful device, it is compact, and the black carbon fiber model makes the device looks even more stunning. The 2020 model has only included two USB ports, both USB Cs on ether sides of the device, unlike the 2019 model which had three ports, but there is a headphone jack and a micro SD card slot on the right. The nifty button on the side of the device that lets you check on battery status via led lights is also gone from the 2020 model, despite its uniqueness not many people used it or even knew it existed on so many of the previous XPS models. An interesting new design feature in the 2020 model is the addition of its newly engineered hinge that allows you to open the laptop with just one hand, its not a major update but its something a lot of users will use and it’s a welcome addition.

The screen has also received an update, it is now running a 16:10 aspect ration instead of the traditional 16:9 providing a more vertical space which is well utilized by the 13.4” screen. The screen is bright, the colors look great, it does not however have touch sensitivity, there are some configuration that provide this feature which will require you to pay a lot more, and honestly its not worth it. The camera is at the top where it belongs and the 2020 version also supports Windows Hello, which means you can log in with just your face biometric. If you do not want to use your face, you can always use the fingerprint sensor on top of the keyboard. The keyboard has also received a redesign with minor tweaks in the positioning of the keys, specifically the left and right arrow keys are full size keys as opposed to the half keys in the 2019 model along with the page up and page down keys. The rest of the keys on the layout is slightly bigger than last years model, they have great sound, good travel and are back lit and assured to be loved by the user. The trackpad is also larger than last years, it’s not a huge trackpad but appropriately sized for a 13” Ultrabook.

The speakers on these are also very good, Ultrabook’s in general have a reputation to have bad speakers with fancy names and brands, however this one is quite good, most likely due to the two watt speakers instead of the standard one or one and a half watt speakers. They are not as impressive as a MacBook speaker, but you will not be disappointed with the output from these.

In terms of performance, Dell delivers a solid device considering how thin and light the Ultrabook is. It is running a 10th Gen Intel Chips, these are similar in CPU performance to last years, however the graphical performance is significantly better. It is still not a gaming laptop and will not give you the best results even for less demanding games, but it will be playable without serious issues. We hope to see an AMD chip within the hood to sort these issues, but it is still very impressive.

The thermal systems have also been improved compared to last years model and if we peak under the chassis, we can see that even the grills have been upgraded to aluminum from plastic, which could easily break before. They have also added 2 fans that in different positions this year than they were in previous years, which allows for better heat dissipation. The Wi-fi card on board is an irreplaceable one, however you do get the option to upgrade the SD. The store version will come with a default SD card from SK Hinx, you can easily remove and upgrade this unlike the 2-in-1 models of the XPS.

The battery on the 2020 model is a 52Wh, no change in size from the previous model, but thanks to the other upgrades, you can still get 10 hours on the device, and if you opted for a higher resolution screen with touch screen then it could be slightly less.

Finally, we do want to warn users that Dell does provide a weird configuration of the device with just a 4GB RAM and that must be avoided at all costs. If you want to experience the device to its full extent, please go for the higher options and you will not be disappointed. This has to be said specifically, because phones these days come with more RAM and cost just $250, so we are not quite sure why Dell has even provided this option. Apart from that very small slip up from Dell, In conclusion, they have once again made a phenomenal device that does not cost too much, but provides an exemplary user experience, aesthetic and performance for every dirham spent on it. It is without a doubt the best Windows Ultrabook that money can get you right now.